I have taken it upon myself to invent recipes, mainly because, let’s face it, half the recipes you read are just dumb. As in, who has these ingredients in the house?
Plus one gets a bit bored, no matter how much one just adores lasagne.
So the other night I was thinking what to have, and I sat there with my cook books (note that most of them were thanks to the library book sale, ridiculously great books at absurdly low prices – bliss!) and nothing jumped out as such, but I did have a brainwave.
Here is what I did;
I marinated sliced schnitzel in garlic, soy and a bit of peanut oil.
I chopped up pumpkin, carrots, an onion or two, discovered I had a lone choko, so added that in and roasted this with paprika, some sugar, (yes, a dash of sugar, oh the sin), some oil and I think that was it. Half way through I had another brain wave, and chucked in a can of brown lentils. To be fair, lentils could be one of those naff ingredients you don’t have, but am a bit of a fan of them, so in they went.
And when it was all done, I just shoved it all in a dish with peas on the side.
Sweet food heaven.
It was so yummy, I had to restrain myself from prideful self-praising, because I would have got one of those “it’s not that great” comments.
But it was that great.
It truly was.
PS: There is no picture of this stupendously magnificent dish, because to be honest, it doesn’t look that great. It actually looks a bit of a disaster. You wouldn’t want to bother, if I included a picture.
PPS: But here’s a picture of those withdrawn library cookbooks. 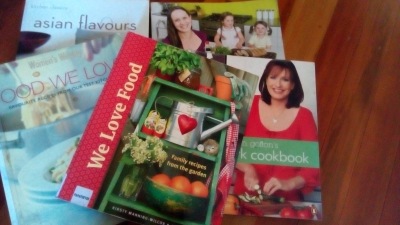